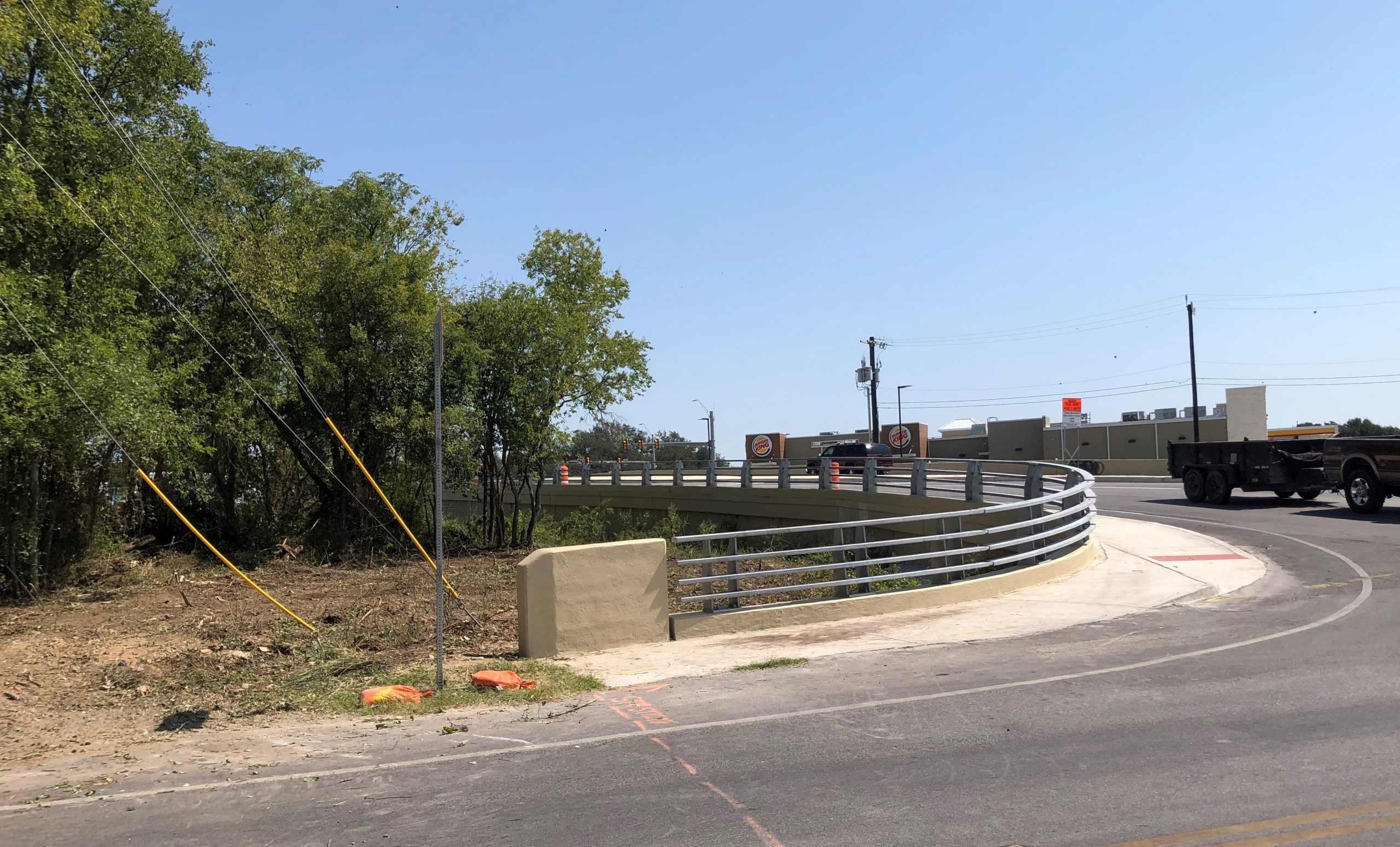 Over the last several weeks Helotes News enjoyed the privilege to learn about and meet with members of the Our Lady of Guadalupe Catholic Church Social Justice Group COPS/Metro. In this article we will share with our readers a weekslong in-depth discussion and interview between one of the group’s leaders, Steve Mendoza and Helotes News.

Recently, the group led a project to clear dangerous overgrowth at the intersection of Riggs Rd. and FM 1560. Helotes News discussed this project with Steve Mendoza over the last several weeks.

This transformed from a simple interview about a community service project into a larger project with various facets related to apparent indifference of the current City of Helotes elected representatives.  We had many follow-up questions delving into the details of who was involved, the process to realize change and reasons why the Mayor and City Councilmembers were not invited to the press conference.

Helotes News: Who all was involved with the project?

Steve Mendoza: This project was addressed by the Our Lady of Guadalupe-Helotes (OLGH) Social Justice Group consisting of about a dozen church parishioners-all volunteers.  A second church ministry group – The Knights of Columbus (KofC), were asked to undertake & underwrite the removal of all overgrown foliage both on private property (2 Fat Guys) and unattended public right of ways.  OLGH KofC is a fraternity of Catholic men that volunteer to service our parish and community.  I am a member of both organizations.

Helotes News: Did the City via the Mayor or any other officer ever offer to solicit volunteers from the city departments to augment your group?

Steve Mendoza: Area resident’s concerns were brought to the Mayor, his staff & 1 alderman [councilmember] Bert Buys – all of them took the Mayor’s hands off position since FM 1560 is a highway and the city has “no authority” over any of the issues or citizens’ concerns which included the design, concrete barrier, limited light distance, excessive speed and area flooding. Furthermore, the Mayor didn’t share any concern over safety at the intersection since, according to Mayor Schoolcraft “only 2-3” minor incidents had occurred in the first few months of 2019, and no compliant had been filed with his office. Fact Check:  Several church members including staff addressed their safety concerns to Mayor’s office prior to our involvement.  Also, our group documented many more accidents involving our parishioners only.

Helotes News: Did the City via the Mayor or any other official ever offer to use their social media platforms to request volunteers to assist your group?

Steve Mendoza: No and our group never had the opportunity to request this type of assistance since the Mayor refused to zoom conference after our initial in person meeting last fall [2019].  The Mayor stated there was no need for a zoom conference since he “had no say-so with highway matter.”

Helotes News: Did your group or the City discuss a permanent solution to ensure the foliage rights of way responsibilities are solved to ensure the public’s safety does not rely on the good will of volunteers?

Helotes News: Did the City via the Mayor or any other official explicitly state or indicate they would address overgrown foliage in any manner in the future?

Steven Mendoza: The Mayor will only take care of TxDoT’s right of way.  He will not entertain any issues involving private property.  Issues like code compliance were addressed with him directly before we met with 2 Fat Guy’s owner. Our committee told him that overgrown foliage was a serious problem and a city nuisance and asked if we could address it using code compliance and he said “NO.”  He [Mayor Schoolcraft] simply refuses to cooperate.

We met with owner of 2 Fat Guys and got his permission to address the overgrown vegetation.  This is when we asked for a zoom conference to strategize and Mayor refused meeting and informed us that this would be a good community project for our “little” committee.  So, we took care of the matter with private resources and community residents. Again, this type of teamwork can be accomplished because of our relationships.

Helotes News: How supportive was the City in your project?

Steve Mendoza: NO! They were completely hands-off.  They refuse to acknowledge a safety problem existed and hence refused to address any of the related issues like excessive speed.  According to Mayor Schoolcraft, he has no say on speed limits and speed enforcement.  He turned down all suggestions such as advocating for lower speed limits and placing a radar speed sign trailer along FM 1560 to evaluate speeding situation etc. After meeting with you [Matt McCrossen], I realized that there are things the Mayor could have done to advocate for our community group including referring us to EDC as a potential method to address this and other worthwhile community projects.

Helotes News: Do you have anything further to state?

Steve Mendoza: It’s interesting how Mayor Schoolcraft is completely “hands off” since this matter is a TxDoT issue. Yet, from day one he was the single individual behind the overall orchestration and implementation of this ill-conceived and dangerous segment of highway.  From acquiring and negotiating the donation of private land to facilitating the building process and project implementation. Yet, he refuses to advocate for the citizens when it comes to safety concerns about the overall design.   He [Mayor Schoolcraft] has always sided with TxDoT because of his desire to keep them happy so he can get the necessary infrastructure that has been so sorely missed in our community since he took over 14 years ago.

Helotes News: Thank you for the amazing response. At this time, I have one more question before I draft. Did you invite the Mayor, Councilmembers and/or any of the City’s staff leadership to the press conference?

Steve Mendoza: No one from the City of Helotes was invited since they were not of any assistance to the project. All city council members were copied on all previous correspondence to Mayor Schoolcraft and none, not even our church parishioner Cynthia Massey ever acknowledge any correspondence.

Upon completing the community service project, I emailed the entire Helotes City Council and sent them pictures of the work done and not a single one acknowledges it nor thanked us for our effort.  Councilwoman Massey did email me back asking me to keep her in the know.

Unfortunately, I’ve  made numerous attempts to contact her in the past & she never replied or acknowledge my correspondence.  Upon reading my last e-mail & seeing all the neighborhood work done, she asked to be kept in the loop! It’s pathetic; the thanks we get for helping our community.

Here’s a tidbit:  I’ve been a member of OLGH Knights of Columbus for over 13 years and we have always maintained Riggs Road as a community service project as a way to save the City time & tax money.  Our group does a Riggs Rd clean up monthly and/or as needed.  The Mayor always “cries” that the City never has money to maintain our community requirements yet he’s on a land grab & continues to promote more housing & development in the area; it’s contradictory to his claim of keeping Helotes “quaint”.  For example, our city streets in Iron Horse Canyon have never been cleaned for lack of city resources and yet he annexes Bricewood and can’t even service them properly!  We need change starting at the top.

Helotes News: Just a quick follow-up. This is going to take another day or two. I’ve had to step away from the keyboard a few times and collect my thoughts.

I’m trying to be neutral by just posting the facts as you replied. But, honestly, I’m much more than [expletive] off. Several levels, like who the [expletive] cares if TXDoT is the most powerful state organization in Texas? We are Texas! Can’t post something on the city’s social media with your group’s project info, date, contact info, and support you that way?

I’m really sorry. I’ve changed the draft several times. I’ll keep trying. I’ll admit, there is going to be a very clear slant on this article with how I present the responses you provided.

Thank you for your patience.

Steve Mendoza: Here’s a little more insight to try to straighten out the slant. OLGH Social Justice Group is a member of COPS/Metro Alliance, an institutional, board base organization that prides itself in holding officials, elected or otherwise, accountable to the citizens and that’s what we did with respects to the intersection [Riggs Rd & FM 1560].  Our parish community identified the situation as a serious problem & we held an accountability session to determine how to best address it.  It was obvious from the start that our local elected officials starting with Mayor Schoolcraft were not accustomed to being challenged or held accountable.

After the improvements were completed, our group asked Mayor Schoolcraft for a follow-up zoom conference to answer the remaining issues and he declined to meet stating that “there was nothing to talk about and nothing he could do to assist us, and that it would be a good community project for our “little” committee to do knowing darn well that it consists of a few senior citizens, including a handicap one.  Since he refused a simple zoom follow up meeting, and since he’s in charge, we decided to move on and exclude his presence and that of the city is leads.

After every action, our group holds a press conference to thank all parties and more importantly, to strengthen our relationships all officials.  As you noticed, every major news station including both Spanish speaking ones & print media were in attendance because they understand COPS/Metro is an asset to our community.  They recognize that if COPS/Metro is involved it must be a worthy community project that warrants recognition.

As you know, Craig Sanders stopped by on my invitation and simply shook his head and said, there’s a serious disconnect between the City of Helotes and the residents (taxpayers) it’s suppose to serve.  I couldn’t agree more!