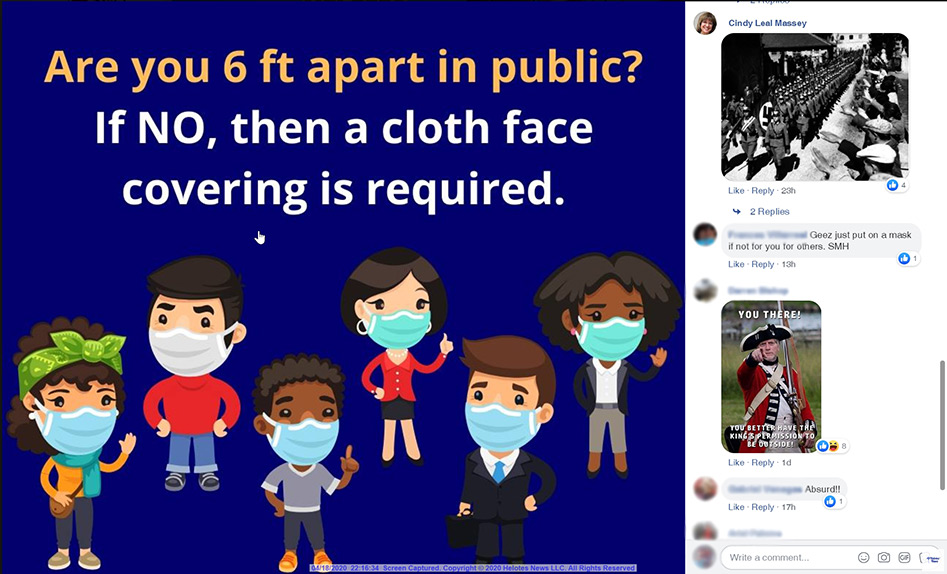 Earlier this morning, I received a news tip informing me of a comment made by City of Helotes Councilmember Cynthia Leal Massey in the comments section of a post on the official City of Helotes Facebook Page. I sat on this all day contemplating to publish or not. There were a lot of things to consider in terms of business. I seriously considered how publishing on this item would impact the Helotes News brand, how it would impact her reelection campaign, who would we lose as readers who support the Councilwoman, how we would gain readers who agree with me, and overall will this benefit the readers?

Clearly, I decided to publish. I decided to write this company’s first opinion based article on this topic when I just couldn’t let the issue go and saw the supportive comments to Councilwoman Massey received in reply to the image post. Why couldn’t I let it go?

I can only speak for myself and not other veterans. It is my opinion that my I am biased against the image comment due to my experience as a former U.S. Army Military Intelligence professional with four tours in Iraq, time spent living and working in several other states, Washington, D.C., Europe, and the Middle East. Specifically, my experiences at the national intelligence level dealing with strategic intelligence requiring more than cursory knowledge of history, as well as current public and classified information on the assignments.

The image only comment by Councilmember (CM) Massey is of uniformed Wehrmacht soldiers marching with the flag of the German Reich during the period when the National Socialist German Workers’ Party (Nazi Party) ruled. It’s posted in the comments section of a public service announcement post informing page viewers about the cloth face requirement if 6ft social distancing cannot be followed in public.

My interpretation of this image only comment by CM Massey on that post is, we now exist in a time where our federal republic and constitutional representative democracy is replaced by Nazi-like single party dictatorship. That is absolutely something I disagree with.

It’s the principle of the matter. Helotes News is still publishing. We are not working with any government assigned censor. Our freedom of press and lives are not threatened. To my knowledge there are no law enforcement or military personal hanging out in public spaces waiting to beat, shoot or ship off violators to concentration camps.

At least for this article at this point in time, my final thoughts on the matter are it’s just poor taste. A councilmember posting an image of Nazis marching with civilians saluting in response to a public service announcement about cloth facial coverings on the city’s Facebook page… Really, that was appropriate?

I chose to publish an opinion article based for several reasons. A standard news article would have been neutral, showed the images and left it at that. The readers would guess as to what our position is. The opinion article format makes it very clear what Helotes News’ and my opinion on the image CM Massey posted without any written context.

*Note: The featured image above in this article is a watermarked screenshot. The only edits we made are blurring out the photos and names of other Facebook users’ profile picture and names.

**Helotes News has reached out to the city’s public relations specialist and Mrs. Morgan’s campaign who is challenging CM Massey for Place 4 in the November election for comments. We’ll update this article accordingly when and if we received those replies.